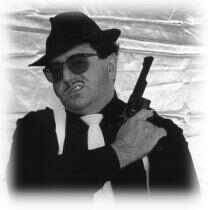 “Book Big Mac for your next conference team bonding activity … …or else!”

The famous gangster murder mystery for your next conference team bonding event.

It’s opening night at “Bourbon Street”, a sleazy nightclub in the red-light district of prohibition 1933 Chicago, but not everybody is in the mood to celebrate.

When the late Mafia don, Macchiato Cappuccino, bequeathed his “Bourbon Street” nightclub to the upstart punk, “Big Mac”, it raised quite a few eyebrows, especially with his children. Fortunately for Big Mac, he has friends in very high places, like the Chief Gottat or the newly appointed Senator Fuller Crapp.

As one of the singers, actors, Mafia, nightclub “hostesses”, politicians or FBI you will be rubbing shoulders with the famous and infamous. Then before your very eyes the celebrations come to an horrific conclusion in this exciting Teammania murder mystery.

What our clients say about the “Bourbon Street” murder mystery